A brief walk through the history of Rothwell & Little River
The present-day township of Little River had its beginnings around 1839, formerly known as Rothwell. There was only one public house on the overland track between Geelong and Melbourne, overlooking the banks of the river. The public house was known as ‘The Travellers’ Rest’ and was for many years, the complete settlement at Rothwell (now known as Little River).

The township of Rothwell was officially proclaimed in 1861. That same year, planning of a railroad began to link the settlements of Geelong and Melbourne, with the original route planned to follow the line of the road with a station situated at Rothwell. The planning of the railway created much excitement in the township.

With the commencement of the railroad, in 1853, William Perrin was granted a license to rebuild the inn ‘The Travellers’ Rest’ which then became the ‘Rothwell Inn’. In 1856, the railroad was complete to Little River and a new township began to form around the station. Unfortunately, most passengers preferred the scenic sea route from Melbourne to Geelong, and Rothwell started struggling to survive with a lack of visitors.

With a decline in day-trippers, Rothwell presented a tantalising opportunity to entrepreneurial enthusiasts who, with varying degrees of success, split up and sold small land parcels to prospective farmers. As the town began to flourish, construction of churches, bridges and schools followed to support the growing population.

The construction of the well-known grand bluestone Railway Station was completed in 1864 and in 1867, Rothwell became known as Little River.

Today, the township of Little River retains its agricultural origins, but continues to evolve as new city arrivals with dreams of a rural lifestyle keep coming. The ruins of the Rothwell Inn remain standing, silhouetted against the You Yangs in the distance, as a silent reminder of the rich history of the area. 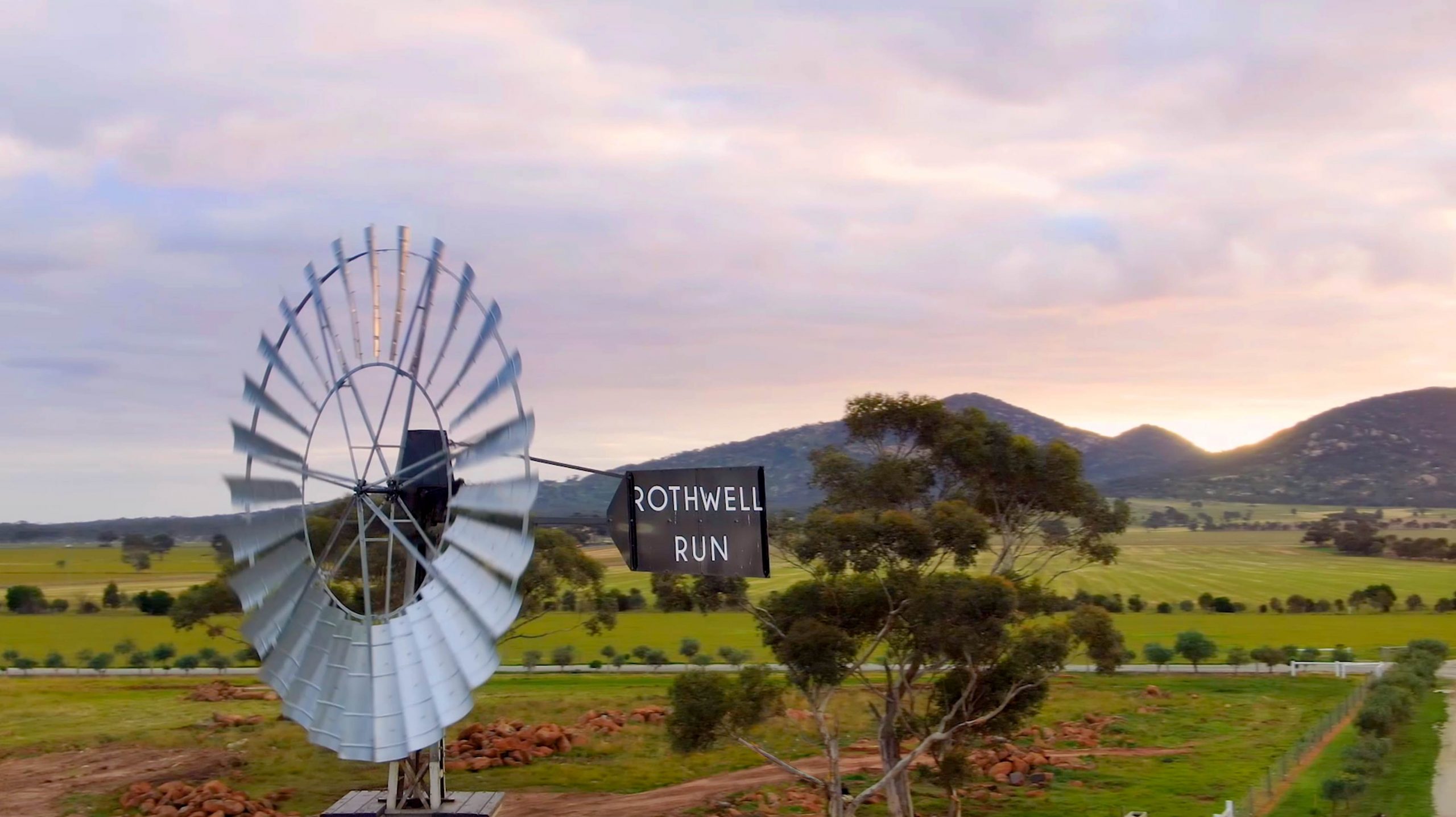 Where did the name Rothwell Run originate from?
‘Rothwell’ was the former name of the Little River settlement (as explained above) and ‘Run’ reflects the definition of “parcel of land”, which for us, represents a dog or cat run.

Surrounding attractions
The Brisbane Ranges are located on the north side of Rothwell Run and can be seen clearly with the wildly stunning You Yang Mountains bordering the westerly side of the property. With its huge rocky landscape, the mountains are a stunning site classified as part of the You Yangs National Park which is heavily frequented by cyclists, hikers, day trippers, picnickers and horse riders.

Little River is located south-west of Melbourne lying approximately 40 minutes from the Melbourne CBD and 20 minutes north of Geelong. It is in direct route of the Bellarine Peninsula, surf coast regions and the Great Ocean Road.

Movies that have been made in the area?
In 1979, George Miller directed Mad Max which was filmed at different sites throughout Little River and surrounding regions.

In 2005, Chris Lilley’s famous TV series ‘We Can be Heroes’ saw one of the main characters’ Nathan being filmed at Rothwell Run in the front house on the property.

In 2015, Liam Hemsworth and Kate Winslet starred in one of our favourites ‘The Dressmaker’. 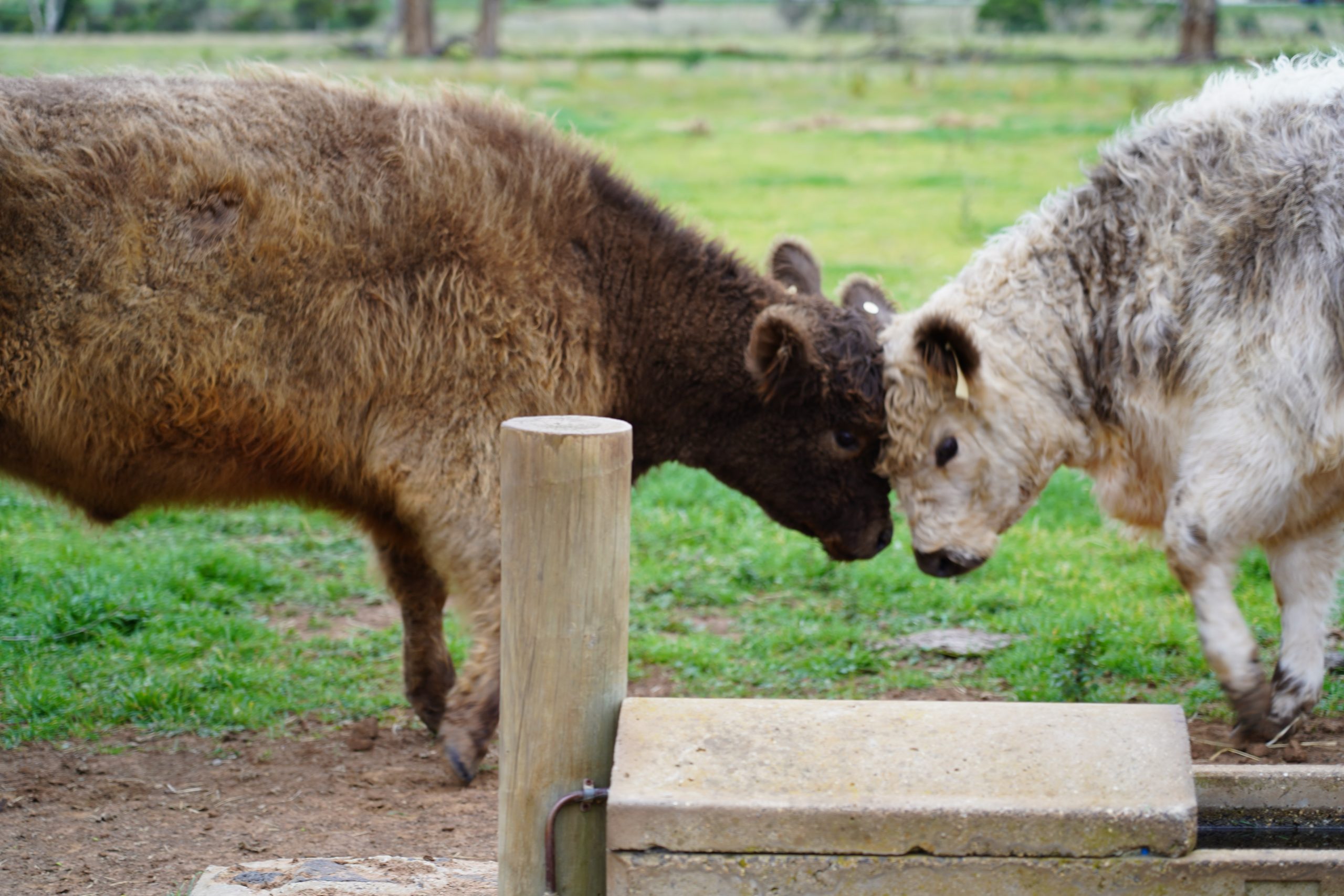 Sustainable efforts
Since purchasing 185 acres in 2006, Lisa and Rick Morrison have planted in excess of 15,000 trees with most being native to the area, under the helpful advice and support of Melbourne Water. All trees on the property have been irrigated and we are proud to have invested into the correct resources to be able to harvest our own water supply. Since the planting of all the trees on the property, we have calculated an increase in rain fall over the past decade.

The large windmill next to the dog pool sits on top of our 140,000-litre water tank which can sometimes be quite noisy when windy! The reason being is that our windmill is constantly working, circulating water around the property.

Along with our naturally harvested water supply, we hold a licence to pump water from the river and have a bore that has been sunk to 108 metres and piped to 96 metres. Our bore has the capacity to provide 12,000 litres of water per hour for future pasture irrigation. Alongside of this we also have mains water.

Each roof at Rothwell Run also serves a purpose, the catchment from the rooves drain into an underground water tank which creates our own water supply for the property and for the operation of the pet boarding facility.

The northern side of the property borders the beautiful Little River. To get down onto the rivers bank, there is a steep climb down which was densely populated with tiger pear (prickle) which is incredibly sharp and hazardous to not only people but to wildlife. Lisa and Rick eradicated most of the tiger pear on the property allowing many of the trees to be properly tended to without the hazard of the prickle and allowing wildlife to roam freely without being hurt.

Rothwell Run has a 6-star energy rating largely attributed to building materials used in the construction of all buildings onsite.

Throughout the build, we used in excess of 500,000 Krause bricks which naturally created insulation to the buildings, minimising electrical requirements to keep your pet’s warm in the cooler months and cool in the warmer months of the year. Insulation through all internal roof space also works similarly, keeping the inside temperatures warmer throughout winter and cooler throughout summer. To support our commercial Insulation, we have  incorporated commercial grade heating and cooling systems throughout all buildings to ensure your pet’s comfort is at its optimal.

THE FARM
We not only love domestic pets, but we also love our rare breeds of cows, sheep, goats, alpacas and pigeons. 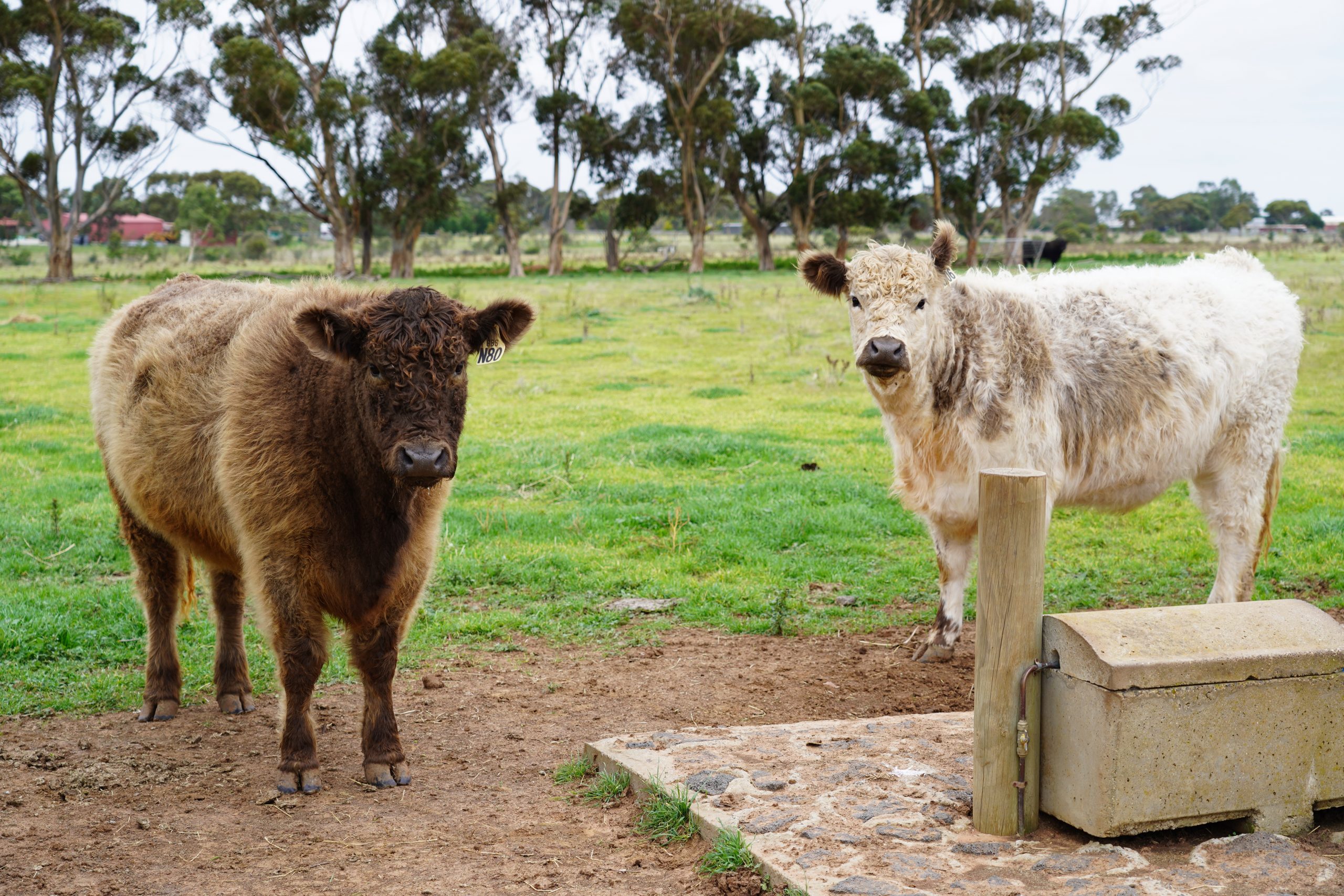 Galloways – The Ancient and Rare Cattle Breed
The history of the ancient Galloway breed can be traced back centuries, originating in the rugged Galloway region in South West Scotland. The harsh conditions in Scotland meant that their development could only take place because they survived. Survival required that the cattle where fertile, calved without assistance, where great mothers and had a very strong constitution. Their unusual double coat protected them from the extreme elements.

The Galloway Breed today still has some popularity in its homeland and Europe, particularly Germany where they are bred for the same survival and thriving characteristics as their ancestors were.

Because the breeds’ strengths and diversity of type and colour, Galloways have been used to develop ‘new’ breeds. Examples are the Poll Hereford, Murray Grays and the Speckle Park. Cross/composite breeding programs, such as the Blueroan, Scottish Black and even the Braway have been economically successful.

Why is the Galloway breed rare in Australia?
Galloways are listed as vulnerable by the Rare Breed Trust of Australia. Like most minority breeds, the numbers are decreasing due to the old adage: ‘there is strength in numbers”. The major breeds are currently more economically popular, suit the current business environment and they get more industry and Government funding. The minor breeds have to reply on enthusiasts, like the Morrison Family at Rothwell Run, Little River, Victoria, to maintain and enhance the diversity of the gene pool.

Dorper sheep
This breed was chosen after we had run Suffolk for some years.  We switched to the Dorpers because of their DIY ability when it comes to their coats.  They do not require shearing, they self shed which means they are not prone to fly strike (which is a common cause of concern in Australia during the summer months).

The Dorper originated from South Africa and are known for their ability to adapt to arid conditions on low roughage and become well proportioned sheep.  They are very attractive sheep with black faces and white bodies.

Goats
The two current goats on the property are Boar goats, both with horns and bought as a pair.  They are white and brown and do a great job of mingling with the sheep and alpacas.  They are very inquisitive but don’t get too close to them they do like to butt you!  Our grandson Charlie has named them. The male is Bernard and the female is Topsy. We will be looking to bring some more goats to the property in the coming months probably Anglo Nubian breed.  They are super friendly and have the best floppy ears. 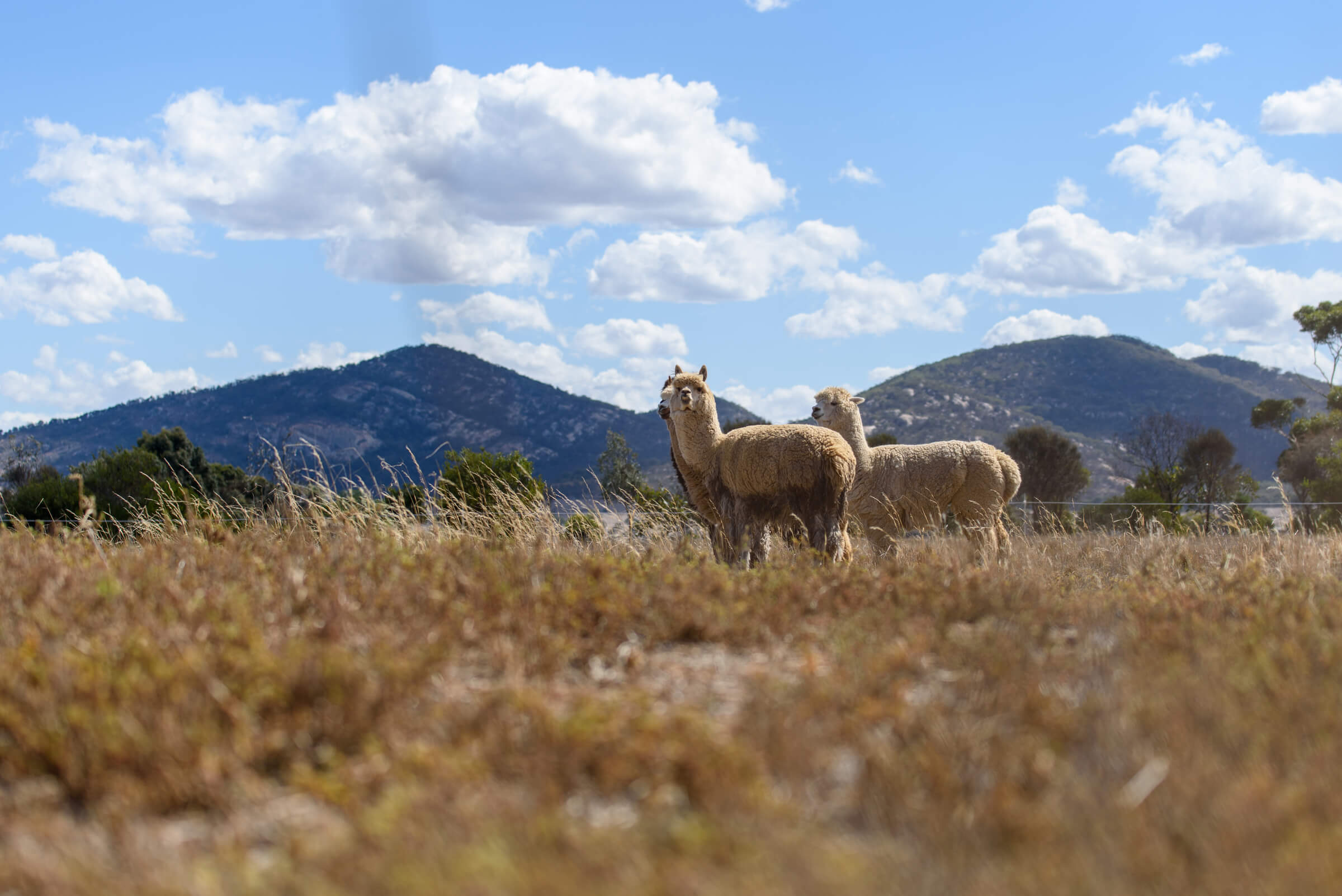 Alpacas
We have about eight Alpacas on the property.  They are the most wonderful animals as they are protectors.  The real purpose of the Alpaca is to the protect lambs and kid goats from foxes when they are born.  To see them at work when approaching a paddock of new lambs is fascinating.  The instinct of protector is strong and they work together in pairs.

The come in a range of different colours and have the most beautiful faces.  They require shearing like most sheep.  This is a very interesting process to watch also.

Pigeons
No they are definitely not on the property for pigeon pie.  We do not kill any of the animals on the property, we enjoy their natural life cycle.

Rick has loved pigeons since he was a young boy, and most of his life has periodically had a loft and enjoyed breeding them.

These pigeons are homing pigeons.  There has been a new loft constructed recently (2020) which currently houses around 100 pigeons.  They came as babies and it has been so wonderful watching them learn to fly.  At times they were out of control, you needed to duck.  The loft is specifically designed for access of the returning pigeons at a height that a fox could not reach.  We do watch out for preying eagles, they do like to hover, that is when we try to get them in quickly.

Poultry
Who doesn’t like a fresh egg and nothing better than watching chooks free range around on a grassy plot.  Our intention in the next few months is to buy some New Hampshire poultry.  They are listed on the rare breeds society listing as a vulnerable breed.

Pigs
We intend to obtain two sows of The Hampshire breed, they too are listed on the Rare Breeds of Australia society.

Note
Rick intends to construct an agricultural shed  (2020) to house the animals during calving and lambing.  If there is a way of protecting new borns of any species from the prey of foxes it is worthwhile doing.  This area will be come an integral part of the breeding program at Rothwell Run.

Most of our farm animals can be seen in paddocks either side of the central driveway.